Welcome to Shimmy Mob Austin/Fredericksburg!
Austin is PROUD to once again be a registered city to participate in Shimmy Mob 2014!
We are VERY excited about another great event and look forward to sharing this wonderful event with you!


Hope Alliance will celebrate 30 years of service to the community in 2014. The agency expanded to include services for domestic violence victims in the late 1980s and opened the 24-hour emergency shelter in 1990. Since then, it has established outreach offices in Georgetown, Cedar Park, Taylor and Hutto to facilitate the delivery of services across Williamson County. In 2004, a county-wide Sexual Assault Response Team (SART) was established with Hope Alliance as a founding member. Today Hope Alliance is recognized nationally as a leader in caring for those whose lives have been affected by family and sexual violence. 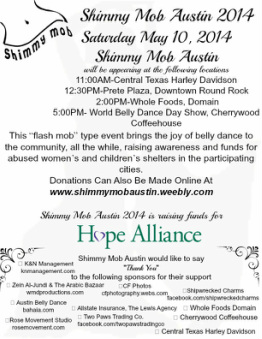 Come see us at any of our performance locations during the day or at our after party show at Cherrywood Coffeehouse and help us raise money for our charity and celebrate World Belly Dance Day!!


Putting together Shimmy Mob is no simple undertaking!

If you would like to be one of our sponsors for this great event in 2015, please contact our 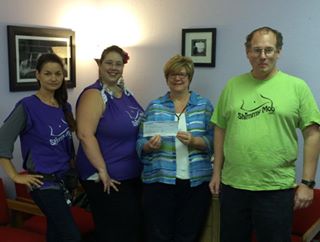